Familiar faces will be up against each other as incumbent Lydia Gloria Dhamuzungu comes up against Philip Wafula Mulindo for the position of Chairperson – Uganda Hockey Association (UHA) as the sport governing body elects its new leaders in an elective AGM on Saturday, 27th March at the UOC Complex in Lugogo.

Wafula is the current General Secretary of UHA and now wants head the local hockey governing body with Gloria Dhamuzungu seeking a re-election.

Both candidates are members of Weatherhead Hockey Club

“I’m offering myself to serve in the position of Chairperson, which will enable me provide leadership to the executive body as we fulfill the constitution mandate and strategic aspiration of the game,” Gloria Dhamuzungu said in a missive.

Among others, one of UHA’s major accomplishment under Dhamuzungu leadership was the holding of DNSS (Development of National Structures and Systems) Project Courses in 2020. Community individuals and teachers in particular were trained as umpires and coaches across the country. Club leaders were engaged too.

Facilitated by FIH experts, the DNSS project was granted to UHA by the Olympic Solidarity through the Uganda Olympic Committee to develop national structures and systems.

Going forward (2021/24 term), Dhamuzungu now wants to get a strategic plan for UHA . “We will need to get a consultant to help us guide the process of a predetermined future,” Gloria Dhamuzungu said.

Wafula who worked hand-in-hand with Dhamuzungu and possibly boosts of the same achievements believes that she did a great job but it’s time to change guard.

“Lydia has done well but we now need a strategic focus in everything that we do,” Wafula told Daily Monitor.

Uganda, Kenya Hockey Sides To Face Off In Test Matches

In the General Secretary race, Stanley Tamale is up against Joseph Kamin. Tamale has been serving as Assistant General Secretary in the soon expiring regime and believes that he is the right man to replace Philip Wafula. 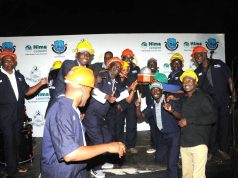